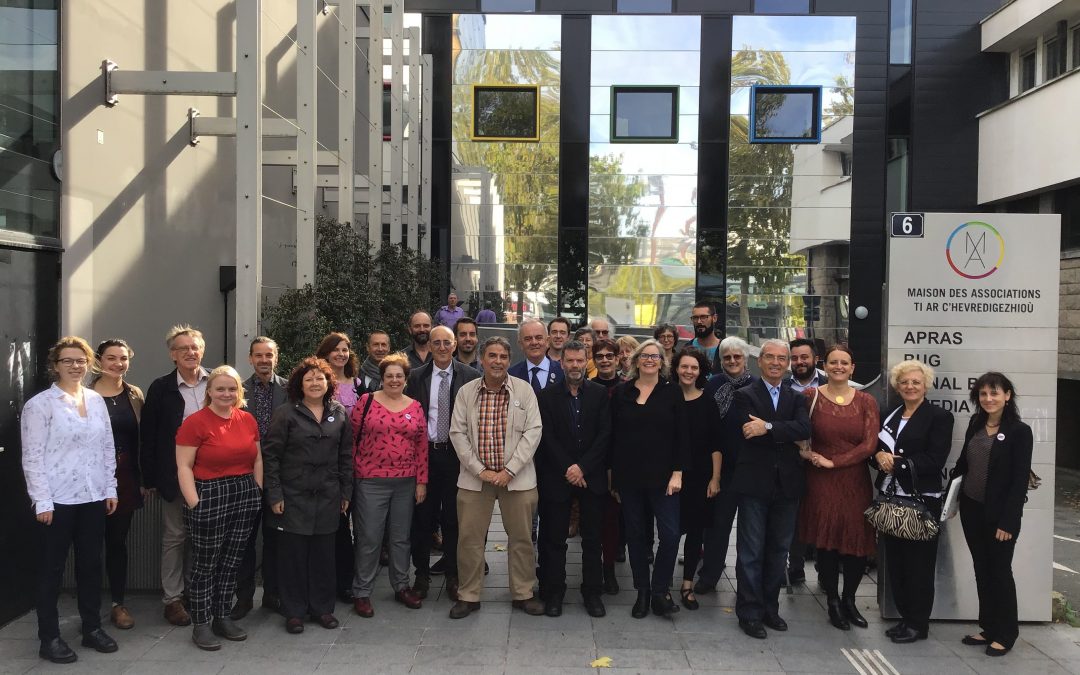 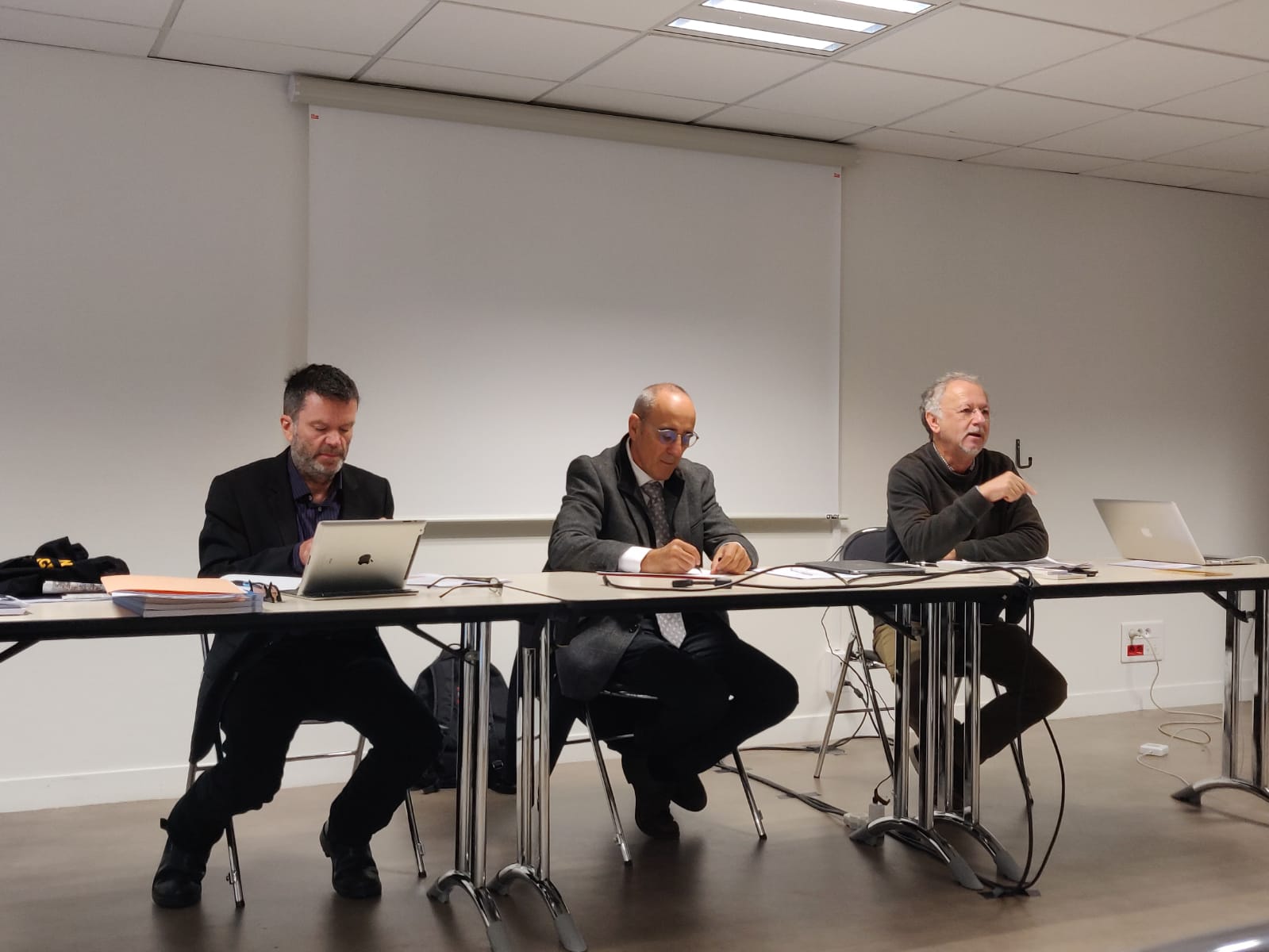 For 2019, Dr. de Varennes has focused on minority language education and human rights globally with the Forum for Minority issues, holding successful regional meetings and collecting recommendations on the issue before the final meeting at the UN in Geneva in November.  Dr. de Varennes discussed his work under his current mandate and gave an incisive analysis on the effective use of the UN Treaties for minoritised language rights. He underlined how NGOs must be strategic in their advocacy work and emphasized the importance of civil society campaigns in achieving protection and rights.

Paul Molac, the Morbihan Deputy who leads the Working Group on regional languages and cultures in the French National Assembly, discussed his work and campaigns for lesser-used languages in the French state, and announced a demonstration on November 30th in Paris over threats to immersion education.

Stéphanie Stoll, President of the Diwan schools organization, discussed the successes and challenges faced by the Breton immersion school organization, as well as the recent issue of the tilde in Fañch.

At the top of ELEN’s business agenda was debate on the situation in Catalonia following the Supreme Court rulings against the Catalan political prisoners, police violence against protesters, and recent attacks by Spanish politicians on Catalan-medium education, with Roser Sebastià (Òmnium Cultural), Marga Payola (Plataforma per la Llengua), and Maria Areny (CIEMEN). 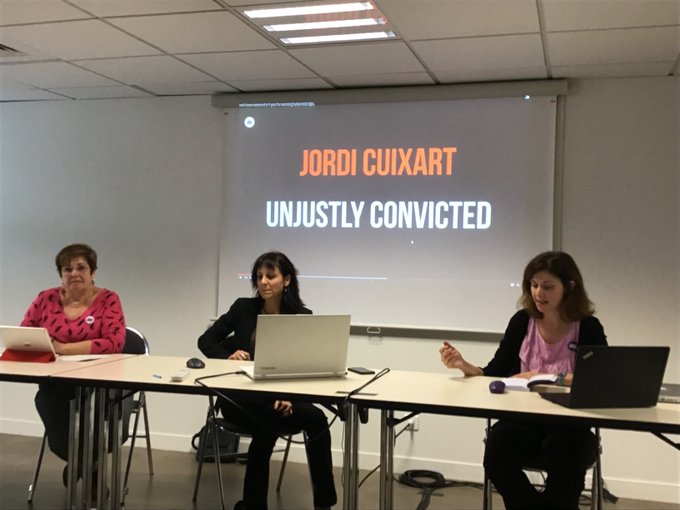 ELEN’s extensive activities and advocacy work were discussed by Davyth Hicks including helping to organize the successful Forum for Minorities on minority language rights and education held in the European Parliament in May. ELEN’s ongoing work in support of the Udmurt language was also discussed following the death of activist Albert Razin, as well as the organisation’s support for the European Citizen’s Initiative “Cohesion Policy for the equality of the regions and sustainability for regional cultures”.

In addition, ELEN participated at the conference of the International Association of Language Commissioners held in Toronto, Canada, which gave the opportunity to link up with language commissioners and indigenous language activists.

ELEN delegates welcomed the creation of a new Chair for Language Rights at the University of Valencia, which has since become a member organization, and discussed plans for future projects with the new department.

Paul Bilbao (Kontseilua, ELEN Vice-President) discussed the ELEN review process, planning ahead, and how the organization further realizes its potential. 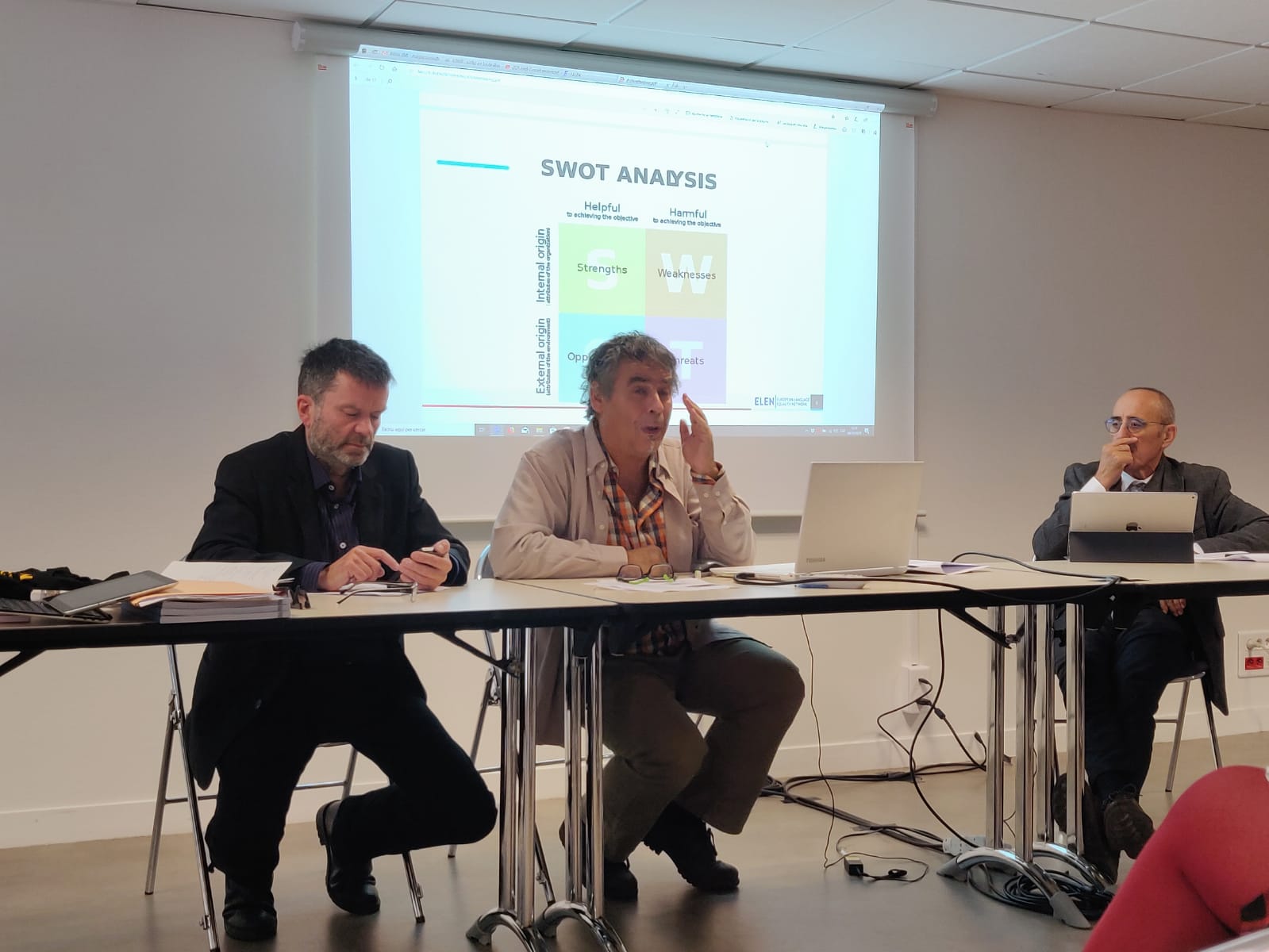 The meeting split into two working groups in order to work on joint campaigns and projects. One of the joint campaigns agreed upon included working to develop more digital provision for lesser-used languages.  The new joint project agreed upon was to establish an ELEN Media Working Group that will bring together lesser-used language media organisations.

The meeting continued with votes on ELEN Resolutions on the Catalan situation, on the recent court ruling in Navarre against Basque, on Galician-medium education, and on minoritised language education in France.

Kontseilua Resolution (Basque Country): ELEN calls on the Navarre Government to appeal the September court ruling on language use in public sector administration which discriminates against Basque.

All the resolutions were passed unanimously.

Several applicant organisations made presentations at the meeting including Yann Rivallain and Samuel Julien from the media organisation Dizale (Brittany), and Ben Spink from the Office for Jerriais. URALIC (Estonia), the Chair for Language Rights (University of Valencia), and Culturlann (Belfast) formalised their membership. 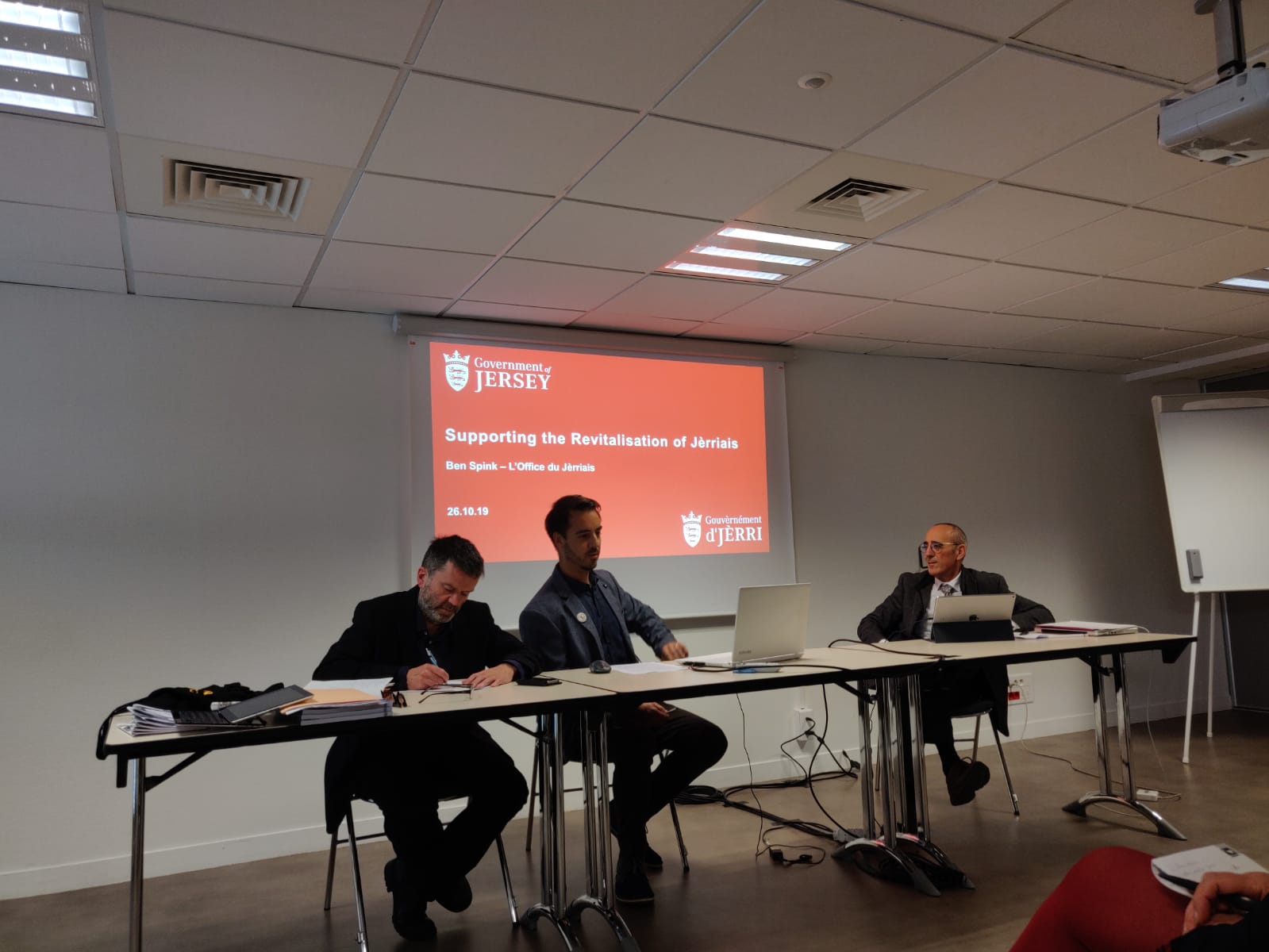 Delegates were delighted to receive an invitation from A Mesa pola Normalización Lingüística, represented by Neal Baxter and Isabelle Kerdudo, to hold the 2020 General Assembly in Santiago de Compostela, Galicia.

Delegates were updated on current issues by Elena Lenz on Arman language and Tatiana Chernyshova on Sorbian, and welcomed a presentation from Emmanuelle Eon and Yann-Edern Jourdan (Kevredad C’hoariva) on a new theatre network.

The General Assembly concluded with a presentation by Tore Cubeddu (Babel Film Festival) and the exciting news about the establishment of a new Sardinian language TV channel – EJA TV. 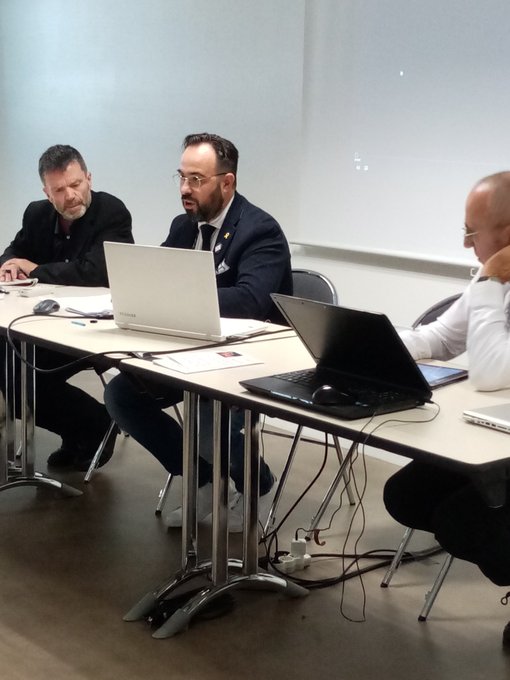 This year the General Assembly was preceded by the European Forum on Linguistic Rights which commenced on Thursday evening with a welcome address from Vice-President of the Breton Region, Lena Louarn.

The Forum featured discussions on language rights in France, Europe and globally, with the UN Special Rapporteur for Minorities, speakers from the European Parliament, ELEN, UNESCO, National Assembly Deputies, the Council of Europe, and Regional Councillors. At the event NGOs and politicians strongly criticised state policies against minoritised languages in the presence of the UN Special Rapporteur and the representative from UNESCO. Demand for the Forum was very high with the event becoming booked out within a day of being advertised.

The Forum and General Assembly were hosted and supported by Kevre Breizh, Kuzul Sevenadurel Breizh, ELEN, and the Breton Regional Council, in partnership with the UN Special Rapporteur for Minorities.

Special thanks go to Tangi Louarn and Armel An Héjer from Kevre Breizh for all their hard work in organizing the events, and to UN SR Fernand de Varennes, Deputy Paul Molac, and Stéphanie Stoll, for coming to speak to ELEN members. (ELEN 2019)