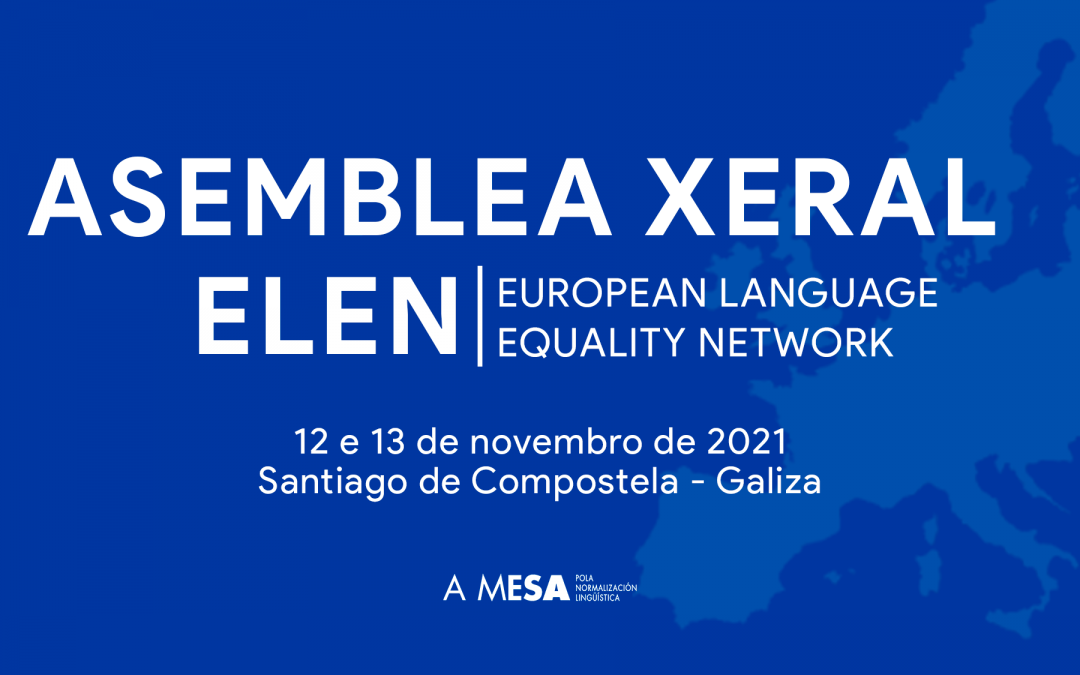 ELEN elects new President and Steering Committee. Calls for repeal of 2010 plurilingualism law; equality for Galician, Basque and Catalan in new audiovisual law; that Galician-medium education be provided at all levels of education; notes general failure of the EU to protect territorial languages and speakers rights; call for Irish Language Act legislation to be introduced at Westminster; International Decade of Indigenous Languages to include European territorial languages. ELEN appeals to UN over censure of Molac Law by French Government.

ELEN member organizations from across Europe gathered in Santiago de Compostela, Galiza, over the weekend for ELEN’s annual General Assembly, hosted by A Mesa pola Normalización Lingüística in the splendid surroundings of the Museo do Pobo Galego. The meeting was held using a hybrid format with many members, speakers and observers participating online, and A Mesa provided interpretation from Galician to English, English to Galician, English to Breton and French. 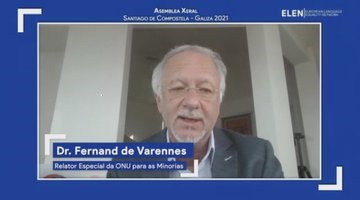 The General Assembly commenced with a presentation from Dr. Fernand de Varennes, the UN Special Rapporteur for Minorities, who used the Dickensian analogy of “the best of times, the worst of times” to describe how the optimism of the 1980s and 90s, with the introduction of the ECRML and FCNM and domestic language legislation, had been replaced by the disenchantment of the present. The speech summed up neatly the disillusionment of activists, especially with the EU, coupled with the rise of hate-speech and violence against all types of minorities, and that, despite the situation looking relatively bleak, it was vital that ELEN and its member organisations keep pushing for language rights, language recovery, and the effective protection of territorial languages. 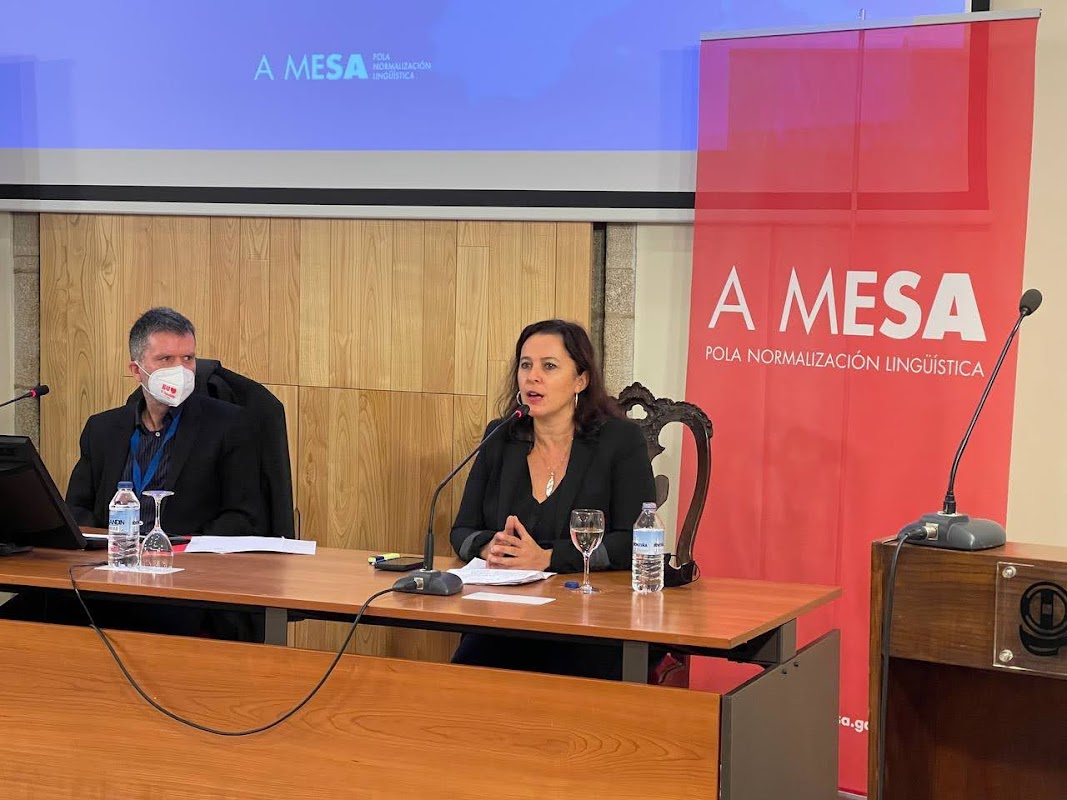 Ana Miranda Paz, who shares a mandate as MEP, discussed activities in the European Parliament on behalf of territorial languages and made several proposals for new legislative initiatives in the Chamber. 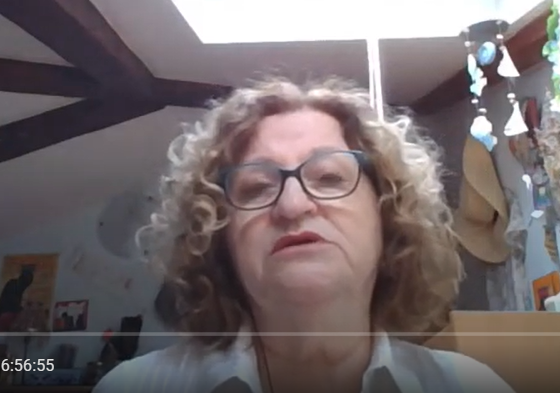 Professor Vesna Crnić-Grotić Chair of the ECRML Committee of Experts reviewed recent developments with the Charter. She welcomed Portugal’s recent signature and that COMEX had been able to resume State visits and welcomed ELEN’s input into COMEX reports on the lack of health information in minoritised languages during the COVID pandemic. She highlighted that with increasing digitalisation States must do more to provide online services in minoritized languages, that hate-speech against minoritized languages is present in all states, and the problems of some territorial languages still not being officially recognized such as Catalan in Aragon or Galician in Castille.

In addition, she discussed how the reform of the ECRML monitoring process from three to five year intervals at the request of State parties was far too long and that to deal with that States must now introduce interim reports every 2.5 years where State Parties report on their implementation of the Committee of Ministers most recent Recommendations for Immediate Action (RIAs) so as to deal more quickly with the main issues affecting a language community.

Responding to questions from Obra Cultural Balear and Conradh na Gaeilge over the continuing failure of some states to fully implement the Charter, Prof. Crnić-Grotić said that COMEX will continue with its work and highlighted the difficulties in enforcing international law if a state government is unwilling to comply.

Elections
ELEN held elections for the post of President and for the Steering Committee. 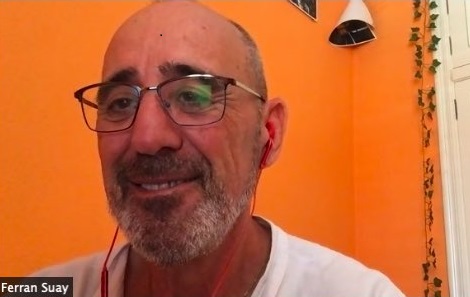 Ferran Suay, the outgoing President, highlighted the growth and increasing impact of ELEN during his mandate. “One of our great strengths is rooted in our ability to work together with shared goals, goodwill and a great capacity for honest cooperation and sharing. I’m convinced that we will continue in this way and we will see ELEN grow even larger and stronger as time goes on.” 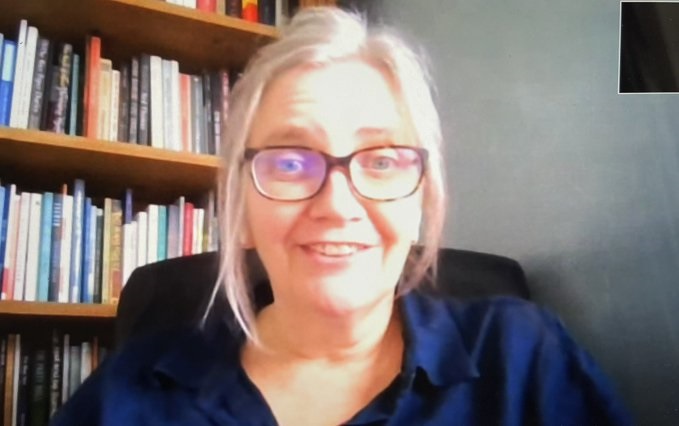 Elin Haf Gruffydd-Jones had been nominated to stand for President by the membership and was voted in unanimously to warm applause.

In her acceptance speech she said,
“ELEN is an important organization: it is a representative organization, bringing together a range of different organiations from across Europe. The word equality doesn’t just refer to what we are campaigning for, it also refers to the way we operate as a network, and equality is a fundamental value for all of us who are part of ELEN.

“We know that we can’t achieve any kind of language equality without activism and advocacy. Generations before us have shown that activism is an absolute necessity in this field. ELEN brings activism and advocacy together, in a very targeted way. Working through all channels available at European and international levels.

“ELEN is bold enough to call out governments and authorities at all levels – when good laws are not being implemented as well as when bad laws are being introduced, or not being repealed. And that is an important strength that ELEN has. I’ve already mentioned equality as a value within ELEN, and I really think that our structure shows that equality in action. We have numerous member organizations, representing millions of people across Europe. We elect our officials: one President and several Vice-Presidents – and this is an important way of working, that demonstrates the diversity of our representation as an organization. As we go forward now, we also have to make sure that ELEN has the right resources in place to carry out this work. We’re very lucky that we have an excellent and highly respected Secretary-General in Davyth Hicks.

“Una lingua que nos defina como povo. Our languages define who we are as people. And whatever way we became part of that language community – whether learned it through our family, in our community, though education, as adults – we need to make sure that it’s there for future generations across all languages. Yes, activism is for life. And so too is European and international solidarity and cooperation across our language communities.” 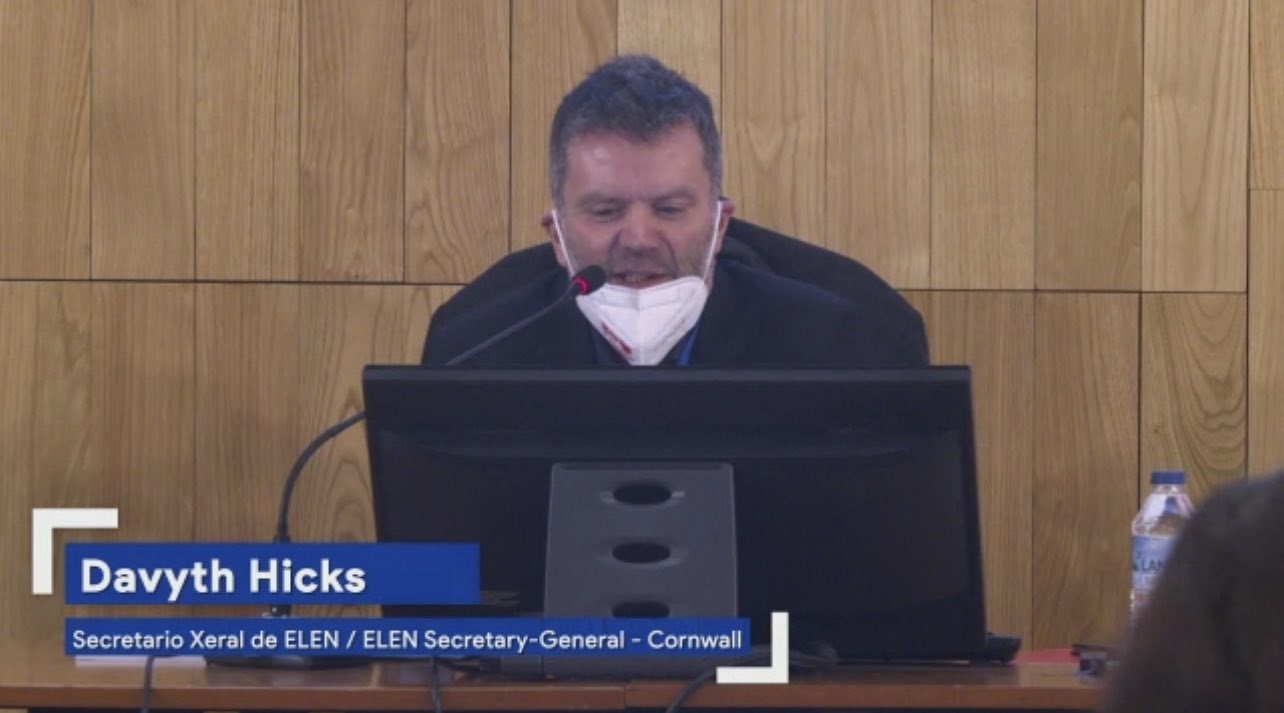 Davyth Hicks outlined ELEN’s activities and ongoing language projects over the past year and highlighted up and coming events for the members. Chief among these were ELEN’s appeal to the UN following the censure of the Molac Law by the French Government, and the ongoing campaign for Irish language legislation. The ILA topic will be discussed as part of the main agenda at the upcoming UN Forum for Minority Issues in December after ELEN worked to secure an agenda item for it.

ELEN was also pleased to report that Portugal had signed the ECRML with a view to full ratification and noted the good cooperation with the ECRML Secretariat in ELEN’s work on encouraging various European States to ratify the Charter. ELEN will be holding a Summer University on language rights in partnership with the University of Valencia in mid-July 2022. The five day programme will also feature a multiplier event for the LISTEN Project on language assertiveness. 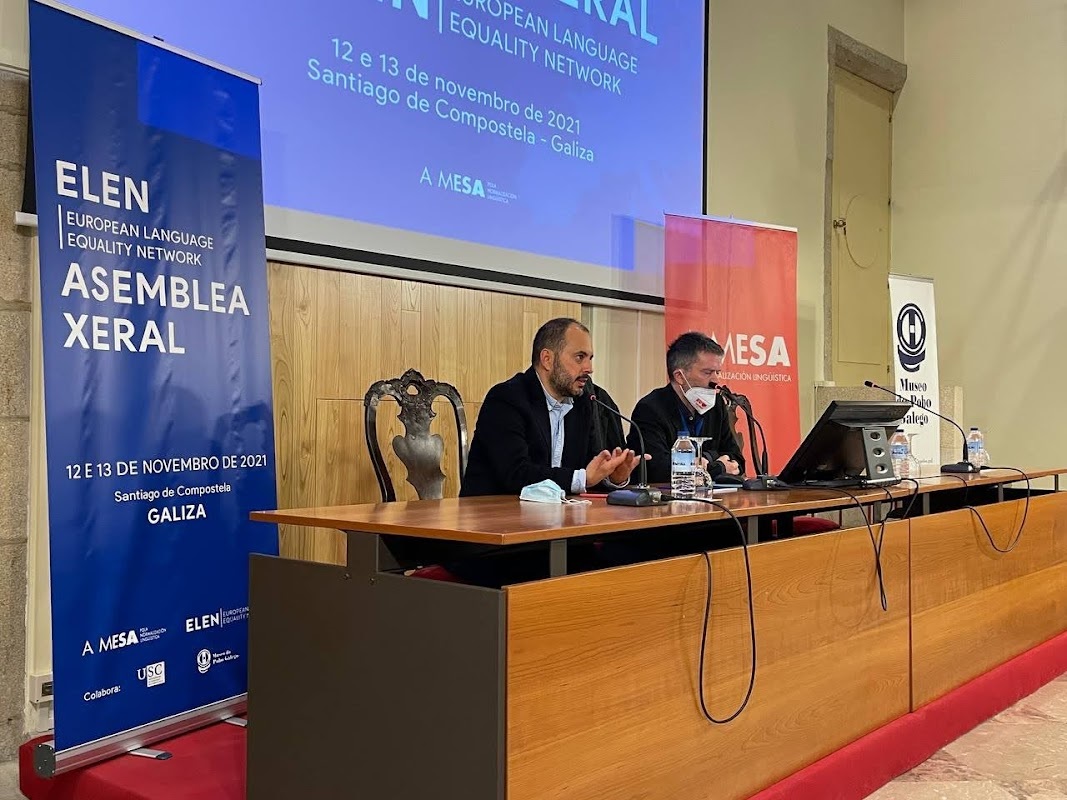 A Mesa President Marcos Maceira discussed the recent campaign work of the organisation including for the equal inclusion for Galician, Catalan and Basque on the new audiovisual law, the need for the repeal of the 2010 Plurilingualism Decree, which has had the effect of lessening Galician-medium education, and for the full implementation of the 1983 Linguistic Normalisation Law and the ECRML. 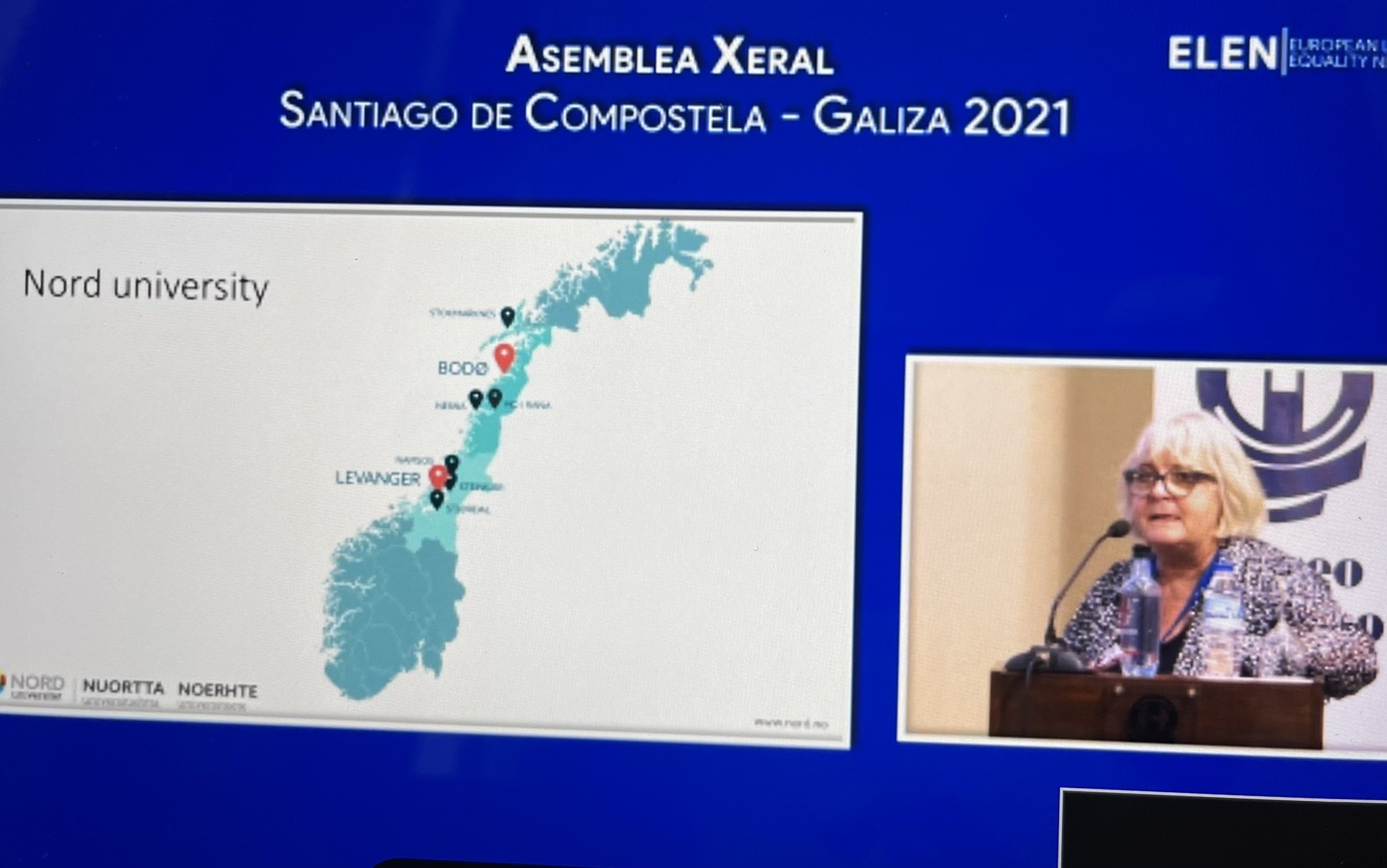 ELEN was delighted to welcome four new members to the organisation. Delegates heard first from Prof. Wenche Rønning, representing Nord University and Mid-Norway Office, who spoke about the university’s work for South Sámi.

Ciaran Mac Giolla Bhéin presented Comhairle na Gaelscolaíochta which has seen great success with Irish-medium education now one of the fastest growing education sectors in the north, but bringing its own key challenges as the demand for teachers increases. 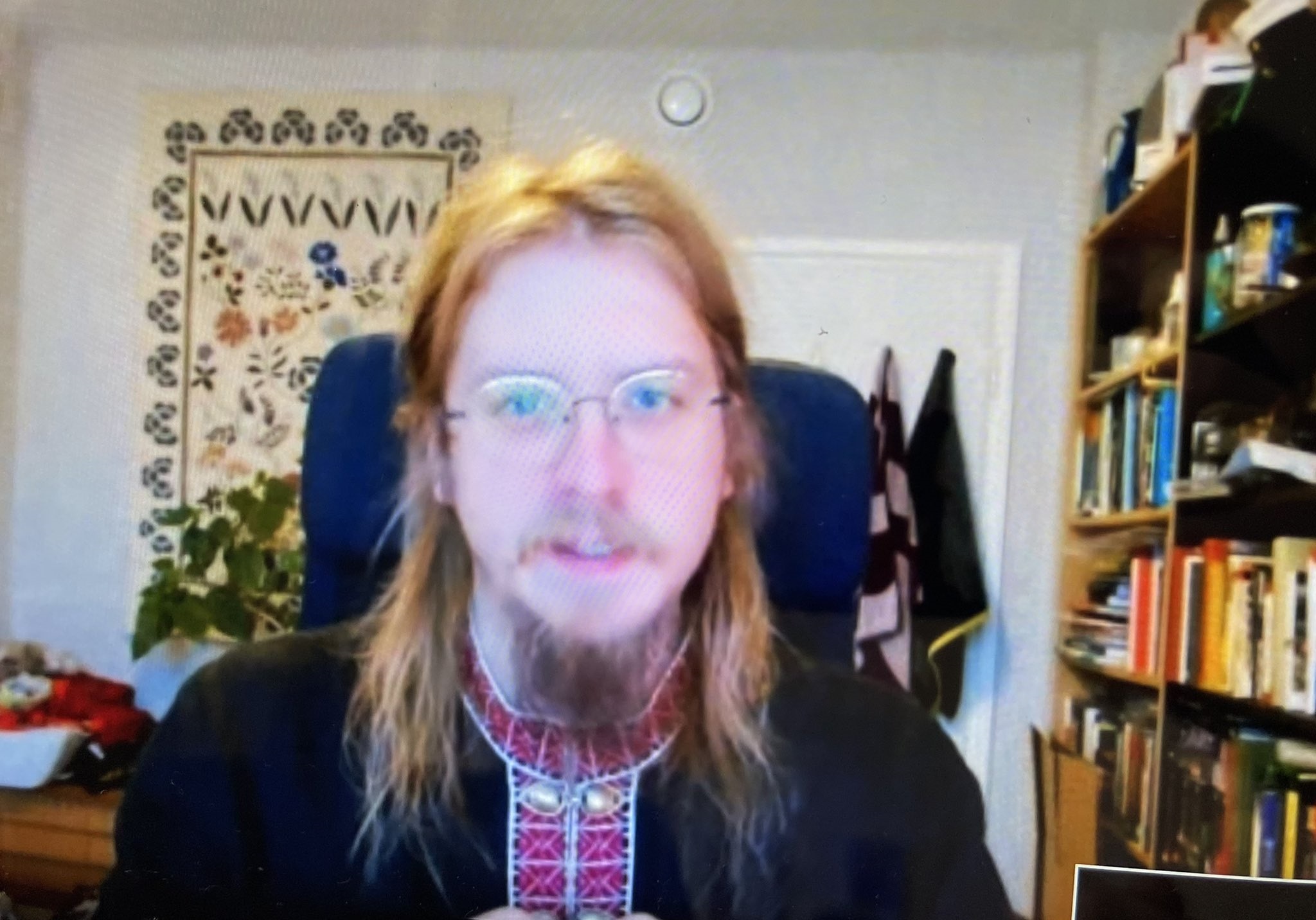 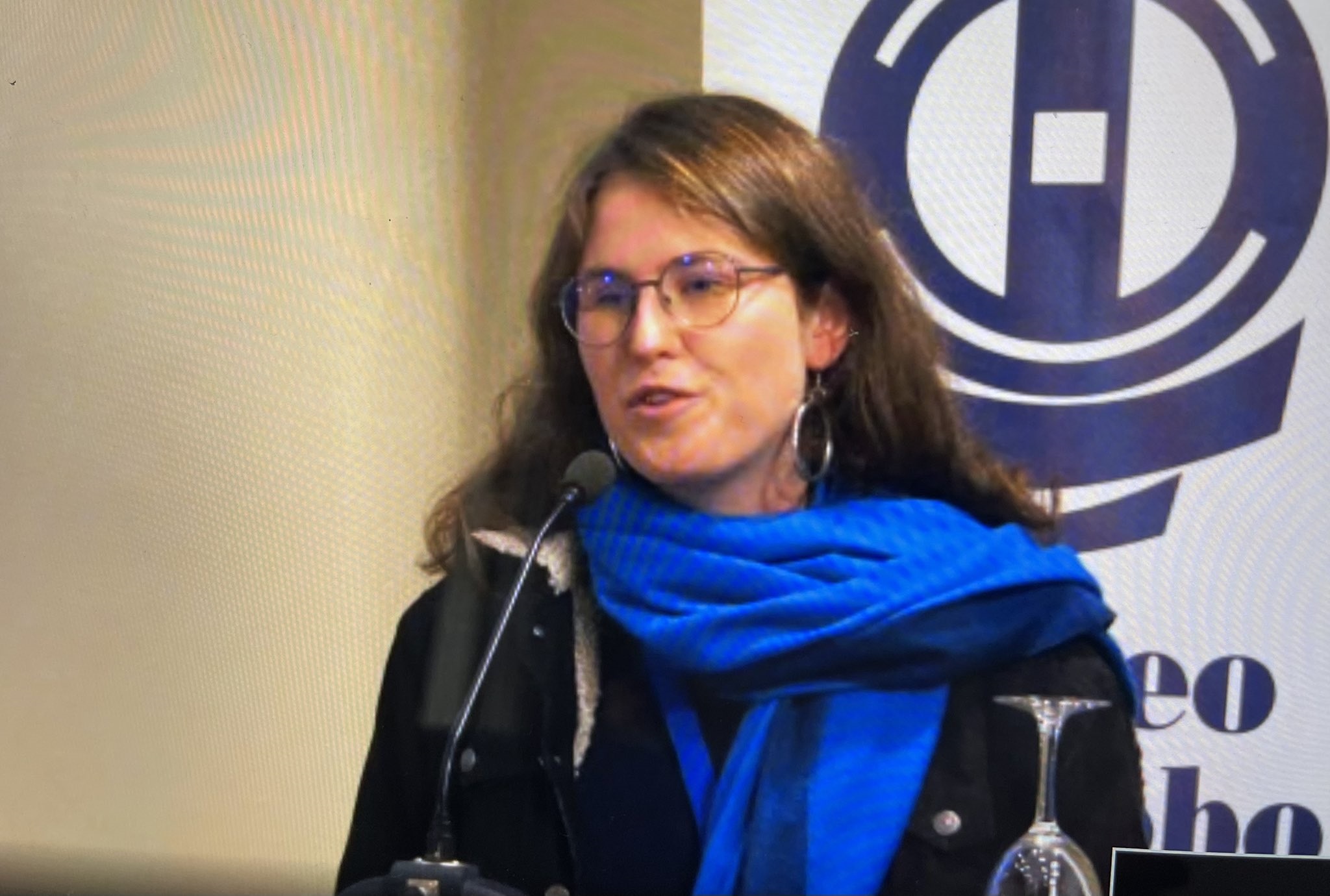 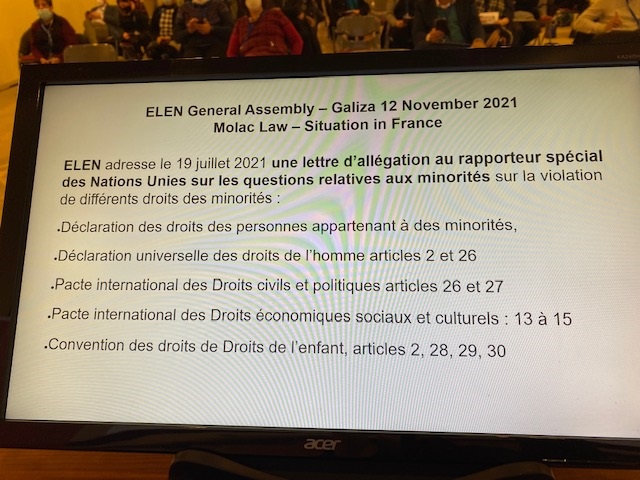 Members tabled several agenda items starting with Tangi Louarn (Kevre Breizh) who gave a full account, in Brezhoneg, of developments leading to the censure of the Molac Law and the subsequent ELEN appeal to the UN on the issue. 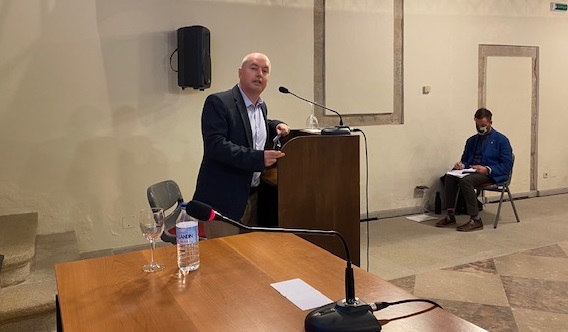 Conchúr Ó Giollagáin (Soillse, UHI) discussed some of the findings from his book “The Gaelic Crisis”, for example, the topic of language promotion without language protection. 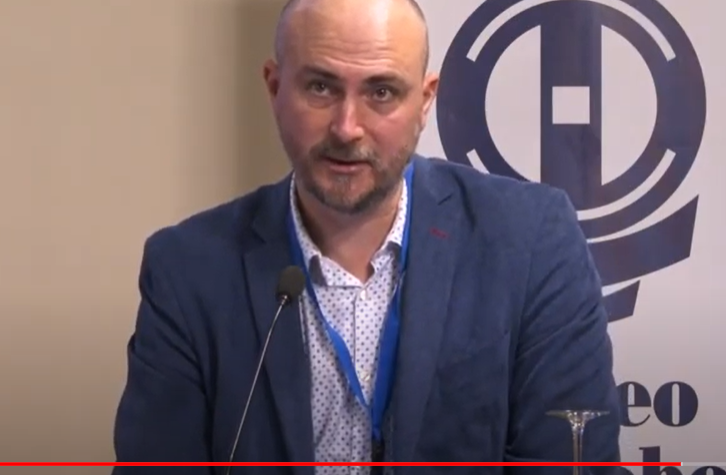 Oliver Loode (Uralic) discussed the non-inclusion of European territorial languages in the UNESCO International Decade for Indigenous Languages and what steps ELEN could take to address the issue. 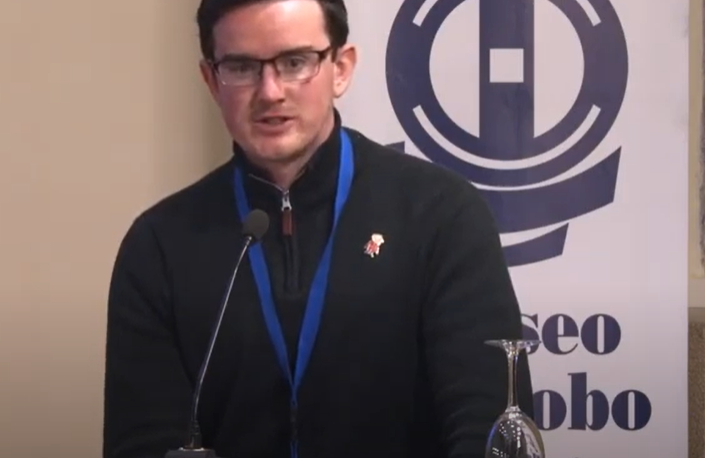 Pádraig Ó Tiarnaigh (Conradh na Gaeilge) gave delegates an update on the current campaign for Irish language legislation and the UK Government’s failure to meet its own deadline to introduce legislation at Westminster.

Working Groups.
Delegates divided into two working groups. One group discussed upcoming language project proposals and which ELEN members would be interested in participating on them. The second group discussed how the second home problem affected different language communities with proposals on how to deal with it, including a proposal to draft a shadow report for the Council of Europe to include it as a national or linguistic minority rights issue. 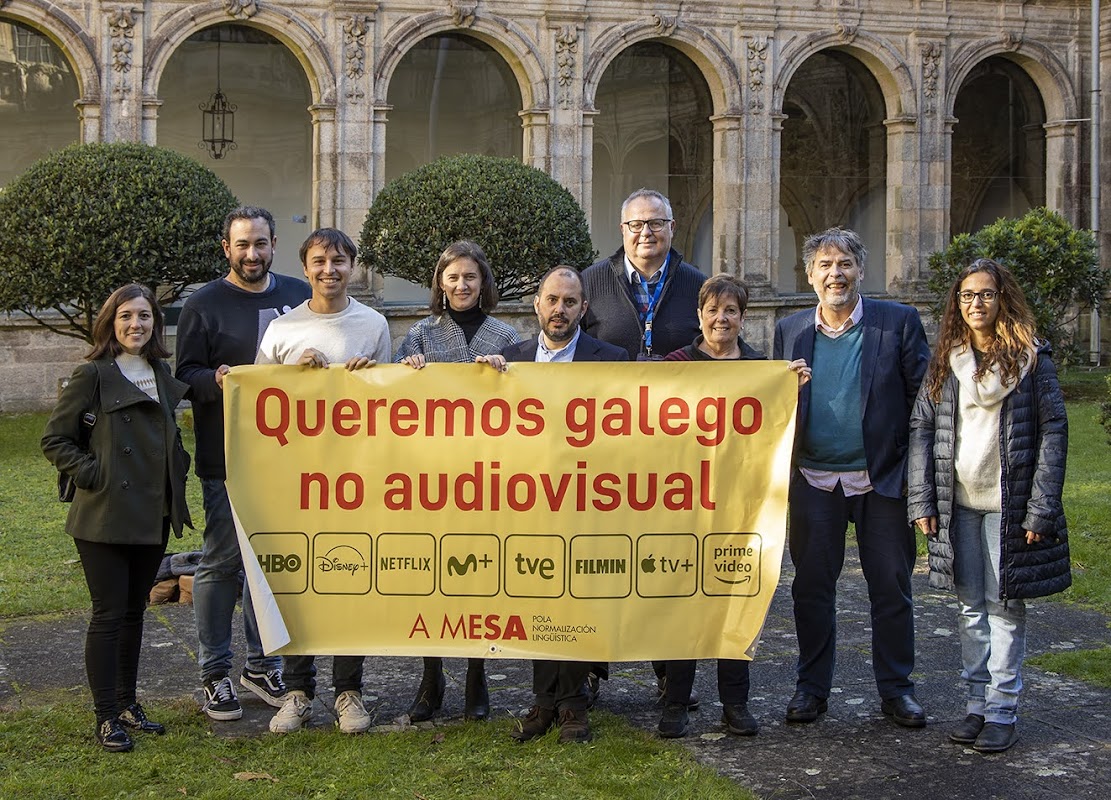 Uralic called for the inclusion of all European territorial languages in the International Decade for Indigenous Languages.

Conradh na Gaeilge called on the General Assembly to continue the ongoing support for the #AchtAnois campaign in the north of Ireland, supporting the immediate introduction of comprehensive, rights-based legislation for the Irish language, including the establishment of an Office of Irish Language Commissioner, the implementation of internationally recognised best practice standards for public bodies, the repeal of the 1737 penal law, Act of Justice (Ireland), removing the ban on Irish in courts, and full implementation of the European Charter for Regional or Minority Languages. Given the continued blockage of the Irish Language Act by the DUP and others at Stormont, this General Assembly calls on the British Secretary of State to honour his Government’s commitments and immediately move the legislation at Westminster.

The Council of Armans called on the Council of Europe’s Balkan Member-States to take measures immediately to implement the PACE Recommendation 1333/1997 for the Armân language and culture, and to add the Arman language as part of their ratification of the ECRML (only Serbia includes Vlach), so as to ensure that the Armân language can be fully protected and revitalised.

All resolutions were passed unanimously.

The General Assembly concluded with a discussion on the venue for 2022 and a summary of the main decisions and conclusions.
Delegates thanked Marcos Maceira and his team at A Mesa for hosting the General Assembly with special thanks to Neal Baxter and Isabelle Kerdudo for providing interpretation from Galician to English, English to Galician, and English to French and Breton. (Eurolang 2021)

ELEN delegates at the Museo do Pobo Galego.