Call to demonstrate in support of Breton on March 13th in Kemper. 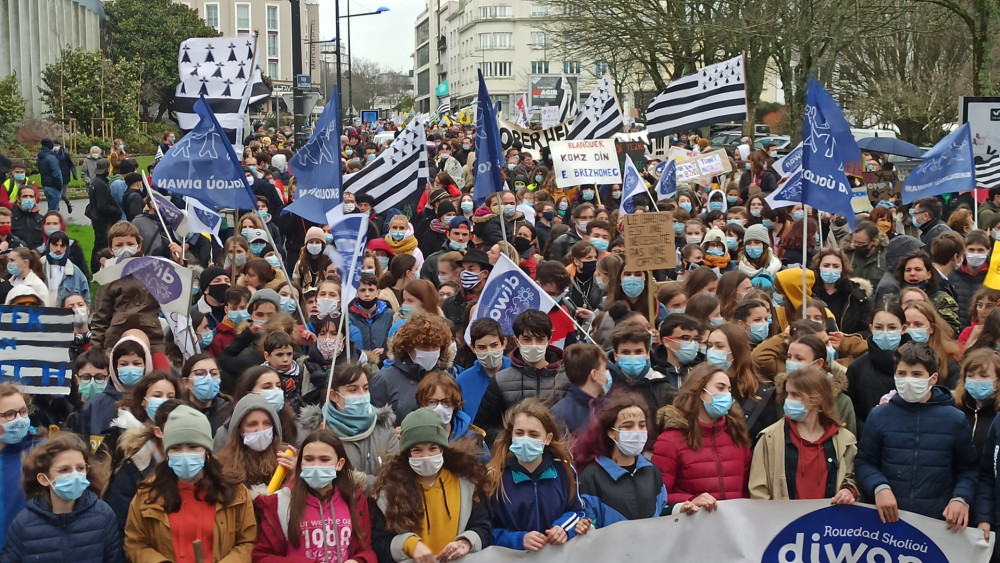 CALL TO DEMONSTRATE IN SUPPORT OF THE BRETON LANGUAGE ON SATURDAY MARCH 13th in KEMPER.

The parents’ associations and the unions are concerned by the insufficient means allocated for bilingual education and the teaching of Breton as a non-compulsory subject in the French National Education system.

On March 2nd, the President of the Breton Regional Council, Loïg Chesnais-Girard, informed them of significant sticking points and disagreements with the French Education Minister which has resulted in a halt to negotiations of the State-Region convention for the transmission of the languages of Brittany and their use in daily life. The enactment of this convention is crucial as it establishes the future financial priorities and initiatives for Brittany’s languages for the next five years. Failure to reach a compromise will have dire consequences for the future of the Breton language.

Because of France’s highly centralised education system, regional language teachers and resources may only be obtained in an agreement between the French State and Regional Councils.

Reaching an agreement with the French State is the only way to assure the people of Brittany that the necessary resources to develop the use and transmission of the Breton language will be obtained.

However, despite the commitment of former French Prime Minister Edouard Philippe on the 9th of February 2019 for an agreement on Breton language education and a decree to allow the administrative use of the Breton diacritical sign “ñ”, recognising the Breton name “Fañch”, no agreement has been forthcoming.

Breton NGOs are also hoping that the French National Assembly pass the bill on regional languages presented by the Breton MP Paul Molac in early April.

The bilingual education parents’ associations and the Breton cultural organisations are united in their request to reach and secure an ambitious convention with the state before the next regional elections in June.

Breton language NGOs and ELEN are calling for the cessation of the deadlock referred to by the President of the Breton Regional Council during negotiations with the French Ministry of Education.

We are therefore calling on all those who support and cherish Breton language and its culture to demonstrate in Kemper (Quimper) on Saturday the 13th of March at 13:13, meeting at Plasenn Sant Kaourintin.

ELEN and its member organisations will be offering all of their support to help achieve the objectives of its Breton members.

Hashtags for the event to be used on social media are #unvanevitarbrezhoneg #BrezhonegMatters, and copying in #ELEN2021.

Supporters internationally are encouraged to express their support on social media using the hashtags above on Saturday 13th March.