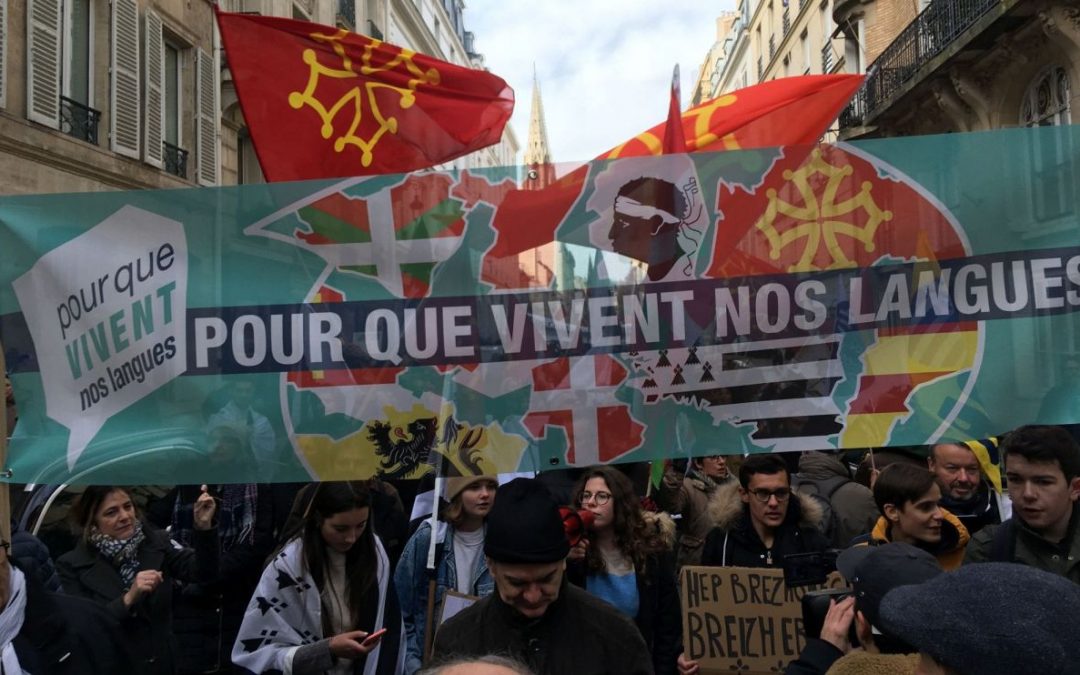 Language NGOs demonstrated in Paris on Saturday 30th November in protest over French Government proposals to reform education. The proposals will undermine the teaching of the lesser-used languages in the French state such as Basque, Catalan, Breton, Alsacian, Corsican, and Flemish, and will lead to less students studying them.

The demo was organized by Breton Deputy Paul Molac and the Corsican MEP Francois Alfonsi with the support of ‘regional’ language NGOs and the European Language Equality Network, represented by Vice-Presidents Tangi Louarn (Kevre Breizh) and Paul Bilbao (Kontseilua) and former President Jean-Marie Woehrling (Alsace Bilingue), gathered together for the event as the Collective ‘Pour Que Vivent Nos Langues.’

Paul Molac underlined that the proposals if implemented could amount to linguicide against languages.

After the demo a delegation of five representatives met with the Chief of Staff of the Minister of Education.  When they left, they explained that they had been “listened to but not heard”.

Language NGOs and political representatives met in the afternoon to discuss next steps in the campaign against the proposed reforms.

Teaching through the medium of lesser-used languages backed by supporting language legislation has been the norm in the management of linguistic diversity in most European countries for generations and is seen as central to language revitalization and maintenance. However, the French state continues with nineteenth century policies that undermine regional language maintenance. This, coupled with the overall lack of intergenerational transmission after years of stigmatization, and the total lack of legislation, means that nearly all of these languages are now defined as endangered.

Ironically, given the French government’s avowed aim to promote French, regional languages are disadvantaged to such an extent in the new proposals that it means that more children will opt to study English. (ELEN2019)