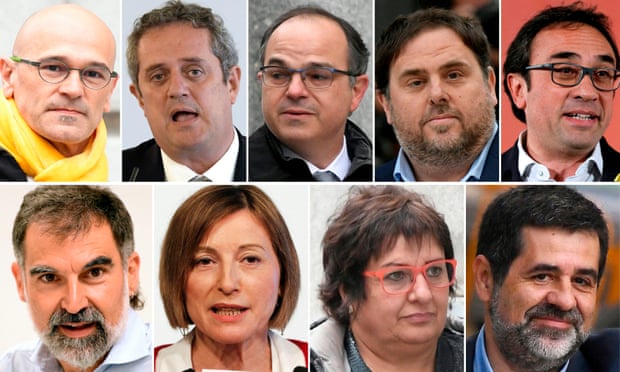 The Spanish Supreme Court’s ruling against the Catalan political prisoners is a disgrace for Spain, for Europe, for democracy, as well as undermining fundamental rights.

The Catalan political prisoners have been jailed for allowing a vote, a vote that they had been given a mandate for by the Catalan people in an election. Organizing a referendum is not a crime while all peoples everywhere have the inalienable right to self-determination, a right which transcends any state’s constitution.

Any political system that leads to such an unjust outcome as the Spanish court’s ruling needs urgent change. The path to solving the current crisis is through political dialogue not prison. Harsh sentences punishing politicians and activists, besides being counter-productive, undermines the justice system itself and is reminiscent of authoritarian regimes, not a democracy.

Several NGOs have noted irregularities in the court proceedings. In June, the UN Working Group on Arbitrary Detention issued two opinions finding the prisoners’ detention as arbitrary. It urged Spain to release them immediately and grant them compensation.  Furthermore, during the court proceedings NGOs, including Amnesty International, Front Line Defenders and ELEN, called for the release of the prisoners noting the excessive use of pre-trial detention.

In 2019 ELEN with Òmnium Cultural have formally denounced the violation by Spain of the right to freedom of peaceful assembly and of association, and of press freedom, twice to the UN Human Rights Council with regard to the Catalan trials.

The sentences are a clear violation of the exercise of freedom of expression, association and assembly, not only for the Catalan leaders but for everyone in the Spanish state.

Such a gross violation of human rights is a clear breach of the EU’s ‘European values’ and acts to trigger Article 7 proceedings against an EU member state.  Article 7 can be triggered by the Commission, the Parliament, or proposed by a third of the Member States.

Therefore, ELEN calls for the Council of Europe and European Union to defend the right to freedom of expression and assembly by calling on the Spanish Government to immediately release those convicted. We urge the EU and the Council of Europe to be consistent and unambiguous in their defense of human rights and to recognize the right of all peoples to determine the political future of their countries and communities.

Furthermore, and considering the harshness of the sentences, ELEN calls upon the European Parliament and the European Union to commence Article 7 proceedings on the grounds that there is a clear risk that Spain has committed a serious and persistent breach of the EU’s founding values of respect for freedom, democracy, justice and human rights outlined in Article 2 of the Treaty on European Union.