ELEN: Spain should be locking up those responsible for attacking Catalan voters, not civil rights leaders.

ELEN statement to the Spanish Government and European Union on the violence against voters on October 1st and on the arrest of Catalan civil rights leaders.

The European Language Equality Network (ELEN) strongly condemns the violence and intimidation against peaceful voters in the Catalan referendum on October 1st. Such violence against voters is unacceptable and has no place in any democracy anywhere in the world and clearly violates numerous human rights treaties ratified by Spain.[1]

ELEN also strongly condemns the imprisonment  by the Spanish state of the two Catalan civil rights leaders Jordi Cuixart from Òmnium Cultural (an ELEN member organisation), and that of Jordi Sànchez from Assemblea Nacional Catalana (ANC) on charges of “sedition.” Their imprisonment also contravenes numerous international human rights treaties ratified by Spain, as well as Spanish court rulings, and we call on the Spanish Government and the European Union for their immediate release. 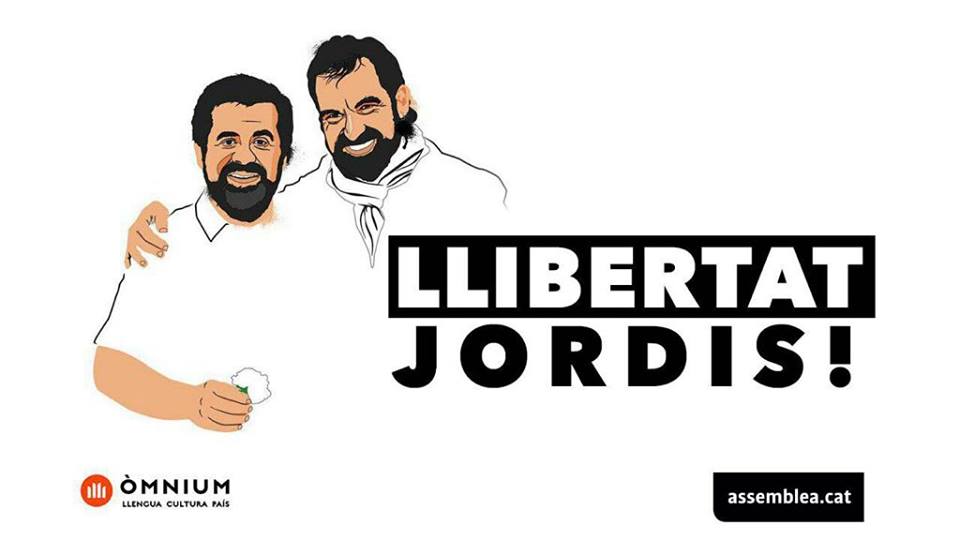 In a normal Western democracy an EU Member State would be compelled to arrest and charge those responsible for attacking peaceful voters – not civil rights leaders who are advocates of European Union founding values such as democracy and civil rights.

ELEN has an unequivocal position of support for these European values and democracy. Our role is to represent the 55 million lesser-used language speakers of Europe. Many of them have experienced contempt and social discrimination simply because they are speakers of lesser-used languages. All of them know that co-existence is possible only when respect for democratic values and civil rights is upheld.

The ANC and Òmnium Cultural, both civil society organisations, have been the driving forces for Catalan democracy and civil rights. They have mobilized millions of Catalans to demonstrate peacefully over several years without one single violent incident. For them to have their leaders arrested goes against the founding values of the European Union.

Their imprisonment contravenes several international treaties ratified by Spain, in particular the binding European Convention on Human Rights (ECHR).  Contraventions of the ECHR include: Article 10 (freedom of expression) which protects speech arguing for secession peacefully; Article 11 (freedom of assembly), which protects a peaceful assembly or demonstration, even if its goal (secession) is aimed at changing Spanish law; Article 3 (freedom from torture, inhuman and degrading treatment), which outlaws unjustified police violence.  In the case of the referendum, many instances of unjustified use of force were documented.  Furthermore, under Article 3, the unjustified deployment of paramilitary national police, is a violation.

In addition, Article 5 (right to liberty) protects the two leaders from imprisonment without access to bail, and their pre-trial detention as such might constitute a violation as the criteria under this Article have not been met.

We note also the violation of the UN International Covenant on Civil and Political Rights (ICCPR) , Articles 19, 21, 7, 9, as well as Article 25(a) – to be free to take part in the conduct of public affairs, which covers participating in elections. The rights of all people in Catalonia under this article were violated with Spain outlawing the referendum.

Furthermore, the actions by the Spanish state against Cuixart and Sanchez and voters are set in the context of a widespread Spanish state offensive against the Catalan referendum and right to self-determination.  Art 1.1 ICCPR states that, “All peoples have the right to self-determination and by virtue of that right they freely determine their political status and freely pursue their economic, social and cultural development.”

While the right to self-determination has mainly been applied to anti-colonial movements, the Canadian Supreme Court’s 1998 ruling on the question of Quebec’s secession from Canada confirmed that self-determination can also apply to ‘regional’ movements in democratic states. If “a clear majority vote in Quebec on a clear question in favour of secession it would confer democratic legitimacy on the secession initiative”. The Clarity Act in 2000 put this into legislative effect and has been the starting point for all considerations of the law on regional or national secession, including the Edinburgh Agreement in 2012 for the Scottish referendum.

The Spanish state is also breaking its own laws by imprisoning civil rights leaders. The Catalan Ombudsman Rafael Ribó stated that “the entities presided over by Jordi Sànchez and Jordi Cuixart have tens of thousands of associates, who defend an ideology −the independence of Catalonia− that is neither punishable nor unlawful, as it is unmistakably clear in the Judgement 42/2014 of the Spanish Constitutional Court. In this decision, the Constitutional Court affirmed that all ideas, including those that seek to alter the foundation of the constitutional order, have a place within the constitutional system, and that preparatory activities can be deployed.”

Regarding the mass violation of the ICCPR, ELEN will be informing the UN Human Rights Council.

Regarding the contravention of the ECHR, ELEN will be informing the Council of Europe’s Secretary-General, the Human Rights Commissioner, and PACE.

For each individual affected by the arrests and police violence on October 1st we advise them to file a complaint with the European Court of Human Rights and with the UN Human Rights Committee.

With regard to the European Union, the mass violation of the ECHR and ICCPR contravenes Article 2 of the EU Treaty (rule of law and respect for human rights). ECHR rights are “general principles of EU law” under Article 6 of the EU Treaty, which the EU, as Guardian of the Treaties, must uphold.