ELEN GENERAL ASSEMBLY IV TO BE HELD AT FC BARCELONA 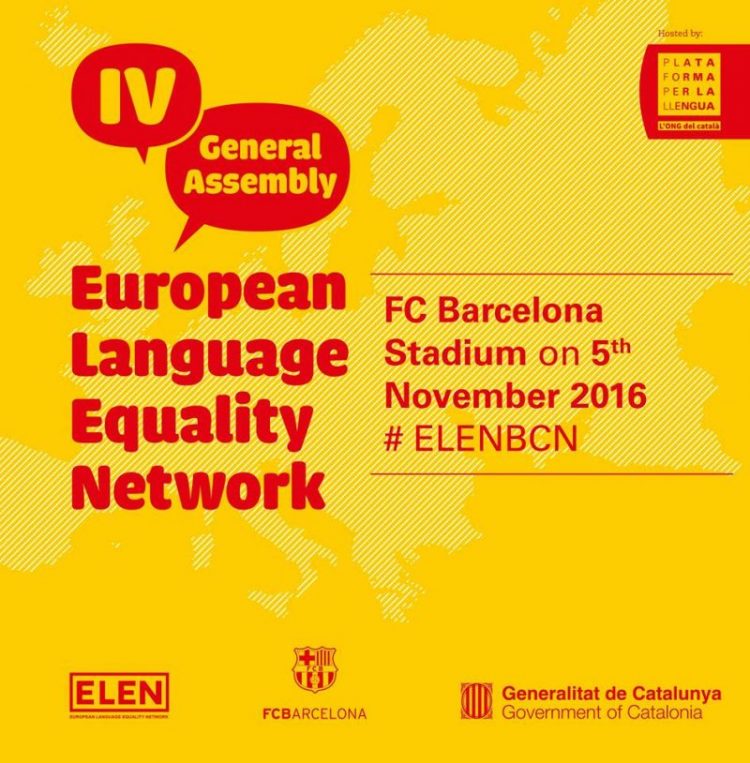 Representatives of regional, minoritised and endangered languages are gathering from across Europe for the IV European Language Equality Network (ELEN) General Assembly on Saturday 5th November which this year will be held in FC Barcelona’s world famous Camp Nou football stadium. The event is supported by the Catalan Government and FC Barcelona, and hosted by Catalan NGO Plataforma per la Llengua.

The President of the Catalan Parliament Carme Forcadell will open the Assembly, along with Plataforma per la Llengua President Óscar Escuder, and FC Barcelona Director Jordi Moix.

Catalan President Carles Puigdemont is holding a reception for all of the ELEN delegates at the Palace of the Generalitat on the Friday evening (4/11), while the Catalan Government Minister for Foreign Affairs, Raül Romeva, will draw the Assembly to a close on Saturday evening.

Plaid Cymru MEP Jill Evans, Esquerra Republicana de Cataluyna MEP Josep-Maria Terricabras, and ELEN Secretary-General Davyth Hicks, will hold a panel discussion on the way forward for European lesser-used languages. It will focus on the ELEN recommendations to the EU following their June hearing in the European Parliament and deal with several topics such as language discrimination, ensuring language rights, the ELEN proposal for a language Directive, and the new Donostia Protocol on language rights.

Rosa de les Neus Marco, representing Plataforma per la Llengua, will discuss current issues affecting the Catalan language, language rights, and the relationship between the Catalan independence process and the language. Hosting the General Assembly is part of Plataforma’s international strategy to export best practices in Catalan protection and promotion and to emphasise the organisation’s role in the broader ELEN network.

In what has become a feature of ELEN meetings, the Head of the Secretariat of the Council of Europe’s European Charter for Regional or Minority Languages (ECRML), Sixto Molina, will discuss with ELEN delegates developments with the Charter and its implementation.

ELEN Vice-President Paul Bilbao-Sarria from the Basque NGO Kontseilua will update delegates on the latest developments with the new, recently completed, Protocol to ensure language rights – set to be launched in Donostia in December.

A panel of Celtic language organisations from Scotland, Ireland, Wales, and Cornwall will discuss the effects of Brexit and how ELEN can campaign to ensure that these languages will continue to be both funded and protected.

Kevre Breizh and ELEN France President Tangi Louarn will discuss the situation facing Breton, Occitan, Corsican, and Alsacian, recent work at the UN CESCR and Periodic Review, new legislative initiatives for ‘regional’ languages in the French state, and report on their conference in Guadeloupe.

Human rights lawyer János Fiala from Szlovákiai Magyarok Kerekasztala (Roundtable of Hungarians in Slovakia) will brief delegates on bringing language discrimination cases to the European Court of Human Rights and other international tribunals.

Delegates will also be briefed by Claudia Soria from the Consiglio Nazionale delle Ricerche on the latest developments with the Digital Language Diversity Project (DLDP) which aims to make lesser-used languages digitally ready, and which has just completed the first ever survey into the digital needs of Breton, Karelian, Basque and Sardinian speakers.

Speaking to the press Davyth Hicks said that: “We are all thrilled to have the support of the Catalan Government, FC Barcelona and Plataforma per la Llengua, for our General Assembly. The whole team have been working very hard over the last few months to make the event a success. It is vital that we raise the profile of serious issues such as language discrimination and language rights on behalf of all the speakers of minoritised and endangered languages both in Europe and worldwide.  We will be speaking about the new ELEN Recommendations to the EU which mark the way forward to help revitalise and stabilise our languages, how we bring language discrimination cases to international tribunals, as well as the new Donostia Protocol. We will also be celebrating Catalan itself, and learning from Catalan best practices in revitalisation and advocacy work. What better place to do that than at the world famous FC Barcelona – right in the heart of Catalonia.”

ELEN represents 44 language communities with 150 member organisations in 22 European States, and works to both protect and promote regional, minoritised and endangered languages.