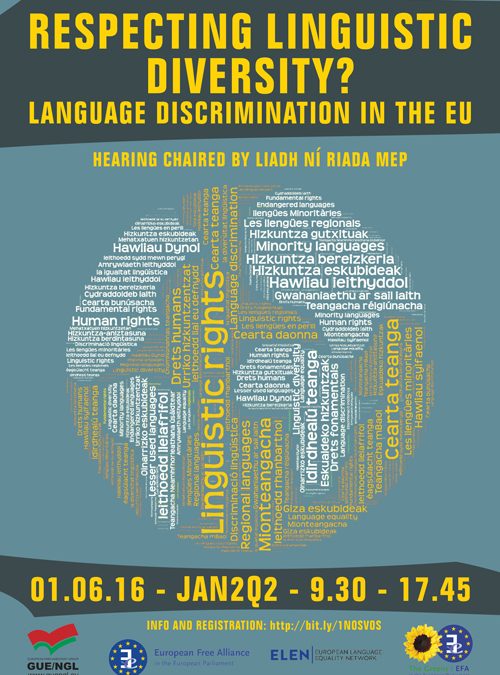 Liadh Ní Riada MEP in partnership with the EFA and GUE-NGL EP Groups and ELEN.

On behalf of the European Language Equality Network (ELEN) I would like to inform you about the Hearing, ‘Respecting Linguistic Diversity? Language Discrimination in the EU” on Wednesday June 1st.

The hearing will discuss current issues concerning the language rights of regional, minority and endangered language speakers, language discrimination, and how, when EU states have signed up both to the principle of ‘respecting linguistic diversity’ and that discrimination on the grounds of language must be prohibited, can we deal with this form of discrimination.

Overview
In January 2015 ELEN presented its Report to the UN Universal Periodic Review (UPR) on language discrimination against co-official language speakers (Catalan, Basque and Galician) in the Spanish state. It revealed a shocking list of beatings and humiliation of people trying to use their official language with state authorities.

However, the ELEN Report only reveals the tip of the iceberg as there are many reports of this kind of discrimination across Europe. France, for example, is notorious for being a ‘rogue’ state on this issue having discriminated against its own ‘regional’ languages so thoroughly in the name of a perceived threat to ‘unity’ that they are all now defined by UNESCO as severely endangered. In addition, we see regular occurrences of language based discrimination (despite being prohibited under the Charter of Fundamental Rights) happening to nearly all regional or minority languages in Europe, for example, to the Hungarian national minorities in Slovakia and Romania, co-official languages such as Catalan and Basque, and even with official languages such as Irish.

The hearing will discuss how the EU and its Member-States deals with this problem. It will review the situation in various States with presentations from ELEN Member NGOs working on the ground who will provide the evidence for language discrimination with numerous case studies.

A panel of experts will assess the current language rights situation and make recommendations with civil society stakeholders on what measures the EU should bring forward to deal with the situation. This will include the Council of Europe’s ECRI recommendation’s that language discrimination constitutes a form of both direct and indirect racism.

Discussion, with participation from the Commission, Council of Europe (FCNM and ECRML), OSCE HCNM, and the UN OHCHR, will focus on how best to use existing legislation already in place such as the Race Equality Directive and the Charter of Fundamental Rights, the Donostia Language Protocol proposals, and on the ELEN proposal for new legislation such as a language rights directive for regional, minority and endangered language speakers. After all, if the EU can protect fish and plants, have a race equality directive, and propose an anti-discrimination directive, why can’t it act to protect its own linguistic diversity?

The Recommendations from the hearing will be presented to the Culture and LIBE Committees, the Council of Europe, OSCE, and the UN.

The programme and poster are attached.

Guests without EP badges are invited to register at: http://www.greens-efa.eu/events/registrations/796-respecting-linguistic-diversity.html

The event will be webstreamed live in six languages on this page: http://efa.greens-efa.eu/respecting-linguistic-diversity-15524.html

Alternatively it can be viewed directly at the service page: http://web.greensefa.streamovations.be/index.php/event/stream/respecting-linguistic-diversity-language-discrimination-in-the-eu